Hello! I am Cristina Buliga, I was born in Radauti, Romania and I grew up in Constanta. At the age of 22 I surrendered my life to Jesus and since then I have been living for Him. At this time I live in The Netherlands and I am a Dutch citizen, ministering in Romania where God has called me. He is the director of my life.

I studied Judicial Psychology at the Faculty of Law of the Ecological University, Bucharest, Romania, graduated in 1996 and obtained my law degree in 2000. By a postgraduate course I deepened my knowledge in this field.

In 2003 I left Romania and settled in Spain. There I followed different courses to build expertise in the work I did – international trade, not knowing that God had another plan for my life. He took me from Spain and brought me to the Netherlands although I had no idea what He wanted me to do there. Nevertheless I knew with certainty that it was God calling me there.

Through the daughter of one of my mother’s friends in the USA I came to an evangelical church, Levend Evangelie Gemeente in Aalsmeerderbrug, in September 2009. Three months later, on December 25th, the church organized a special evening for those who would otherwise celebrate Christmas alone, of which I was one. Then a young woman asked me why I was in the Netherlands, and this was not the first time. As always I replied: “God brought me here but I don’t know why”. I had been asking Him for three months but He had not answered yet. Then she continued: ”What do you think about prostitutes?” For a few seconds I remained speechless. As a matter of fact I knew very little about prostitution, nor about sex exploitation or human trafficking, as these subjects were – and still are – taboo in the Baptist church I attended. It was a domain we avoided talking about, ignoring it most of the time. I had however occasionally read news about trafficked victims and traffickers, so I answered: “I don’t know what to say, I can only say that my heart is full of compassion for them, and that I would not want to be in their place for even five seconds.”

Her next question was: “Have you ever thought about helping them get out of prostitution and start a new life?” This remark struck me, right there I received the answer in my heart, and I knew why God had brought me to the Netherlands. This was what He meant for me to do: helping these girls meet Jesus and start a new life.

The young woman continued: “I have a friend in Amsterdam whose organization helps women in prostitution to be released from this form of slavery and start a new life. He needs a Spanish speaking volunteer for the women from Latin America. The fact that you are Romanian by birth is an extra advantage, since there are many women and girls from Romania working in the Red Light District.”

So, on January 24th 2010, I started to work with this organization “Bright Fame” in Amsterdam. I started as a translator and I brought the good news of the Gospel to these broken souls. I showed them Jesus’ love and the fact that He accepts them as they are. In the meantime, I continued my studies in the field of psychology of victim and aggressor, also pastoral counselling to victims in a rehabilitation program, to accompany the restoration and reintegration process in society.

Over the years, I worked with various organizations in the Netherlands, Belgium and Italy  where I saw the dramatic situation of girls exploited in prostitution, many of them from Eastern Europe and even Nigeria. The deepest pain I felt was that we as organizations saved one, two or three girls in few months, whereas traffickers and pimps brought in three, four, even five girls instead in the same time.
While studying this phenomenon, God made it clear to me:

Rescuing victims is extremely important. However a better and safer way to get rid of this scourge is to prevent it.

That’s the reason why I started to analyse all available resources to prepare a prevention project to run in Romanian schools, warning young people of human trafficking.

When I returned to Romania in 2015, I found that prevention campaigns against human trafficking were held and that several organizations supplied information material. However, personal attendance in prevention is lacking and I believe it is essential that more people are involved on prevention in order to succeed. Therefore I sought cooperation with the Dutch organization “Hart voor Bocsa”. They have 25 years of experience in humanitarian activities in the city of Bocsa in the county Caraş-Severin. People there had little knowledge on human trafficking, so we started a prevention project there.
Also I completed my studies in this domain, obtaining a Master in Prevention at the Faculty of Psychology and Sociology of the Western University Timisoara, Romania.

I love to teach and encourage young people to use their potential and talents received from God to build, create and leave something beautiful behind. I like to work with young teenagers and children too, teaching them to cope with difficult everyday situations and to live a meaningful life. My goal is to show them how to protect themselves from suffering as a result of human trafficking. I love to teach people to love each other and to know their true value. 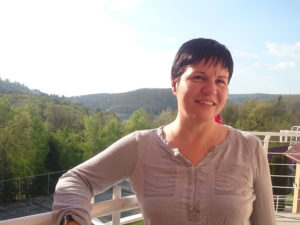 About what I believe…
I believe that faith is personal. I believe in Jesus Christ the Son of the Living God as our Saviour and I believe that only through Jesus the Lord, the Holy Spirit and God Almighty, we may have a free and beautiful life.
I believe that all of us are part of the body of Christ and we need each other to fullfil His mission, vocation, dreams on earth. I believe that God’s love is the same for each of us and does not take into account our colour, symbols, shapes, or our ways of expression.
I believe we have to work together and cooperate, because we need each other to stop this modern slavery. I believe schools, churches and communities have an important role in preventing and combating any form of exploitation and slavery.